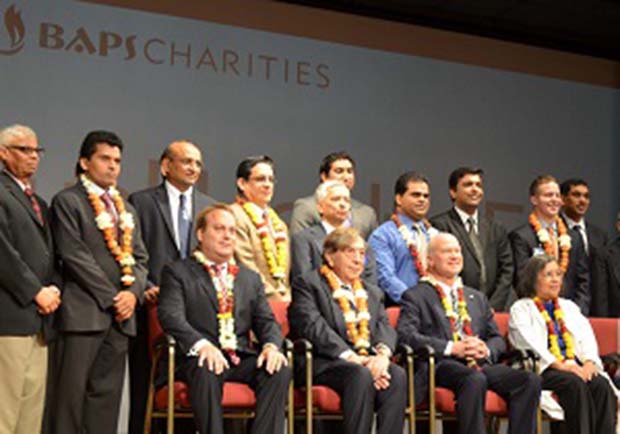 Houston: Prof. Samba Reddy was among those honored at the BAPS 14th Annual Health Fair held on April 26, 2014 in the Houston Swaminarayan Mandir, the biggest Hindu Temple in America. Prof. Reddy was honored for his exceptional professional accomplishments and community services, both of which continue to inspire Indian-Americans of all age groups.   BAPS Charities, the public service wing of BAPS that has built hundreds of the world’s largest Mandirs, is a champion of community service that has touched millions of needy people worldwide. <br>They have been conducting annual health fairs in the Houston area since 2000 which, to date, have benefited over 33,500 individuals through the volunteer services of over 2000 physicians, 2500 allied healthcare professionals, and countless volunteers. BAPS’s massive scale and their efforts to positively impact the local community have been widely recognized, drawing attention from many big names. Prof. Reddy was a guest of honor at the BAPS 14th Annual Health fair in Houston along with notable dignitaries such as Dr. Stephen Brotherton, Texas Medical Association President and Hon. Robert Hebert, Fort Bend County Judge.<br> Through two decades of research, Prof. Reddy, a professor of medicine at Texas A&M University, has made exceptional contributions to medicine by inventing new treatments for epilepsy, which affects 60 million worldwide. Additionally, Prof. Reddy has a commendable community service record, especially in providing education, healthcare, and guidance to undeserved populations. He helped conduct over 20 eye camps, vaccination drives, and health fairs of his own in India and the United States. Furthermore, as Community Chair of NATA, he has been answering emergency calls for tragedies and deaths involving Telugus and Indians in the U.S., providing services such as funeral arrangements. His NATA team has raised an emergency fund for this task. The 14th Annual BAPS Health Fair has benefited over 2500 people, providing various medical services and inspiring health consciousness among the population.<br> “In terms of scale of operation, this is the best health fair I ever attended. It was meticulously organized and perfectly executed with a dedicated team of volunteers, doctors and organizers,” said Prof. Reddy. “I am grateful to BAPS for this profound honor and the opportunity to witness the fair. I have learned a great deal from them about community service. I admire BAPS for promoting the spirit of seva (selfless service)-giving back to the community which has given so much to us.”